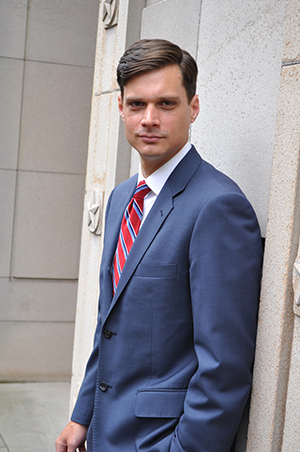 John Robb is an experienced trial attorney with a passion for representing people facing criminal charges.  Mr. Robb earned his Bachelor of Science degree in economics from Barrett, the Honors College of Arizona State University.  He then attended Arizona State University’s Sandra Day O’Connor College of Law, where he earned a trial advocacy award from the International Academy of Trial Lawyers.

Mr. Robb began his legal career at Multnomah Defenders Incorporated, one of the largest public defender’s offices in Oregon. At MDI, he handled more than a thousand criminal cases and went to trial on charges ranging from misdemeanors to major felonies.  In 2013, Mr. Robb attended the Trial Practice Institute at the National Criminal Defense College in Macon, Georgia.  He authored a chapter of the 2014 edition of the Oregon Criminal Defense Lawyers Association’s DUII Trial Notebook, and has spoken at continuing legal education events put on by OCDLA and the Multnomah Bar Association.

In 2016, Mr. Robb left MDI to begin his private practice.  He has been with Kevin Sali LLC since then, working on a variety of cases in state and federal courts.